We can predict cognitive functioning, by replacing Tea drinking in the equation with the value 10:

Therefore, if you drank 10 cups of tea per day, your level of cognitive functioning would be 53.82.

Estimate a linear model for the pubs.csv data predicting mortality from the number of pubs. Try repeating the analysis but bootstrapping the confidence intervals.

Looking at the output, we can see that the number of pubs significantly predicts mortality, t(6) = 3.33, p = 0.016. The positive beta value (14.34) indicates a positive relationship between number of pubs and death rate in that, the more pubs in an area, the higher the rate of mortality (as we would expect). The value of $ R^2 $ tells us that number of pubs accounts for 64.9% of the variance in mortality rate – that’s over half!

The bootstrapped confidence intervals are both positive values – they do not cross zero (10.92, 100.00) – then assuming this interval is one of the 95% that contain the population value we can gain confidence that there is a positive and non-zero relationship between number of pubs in an area and its mortality rate.

The bootstrapped confidence intervals do not cross zero (0.82, 1.08), then assuming this interval is one of the 95% that contain the population value we can gain confidence that there is a non-zero relationship between the likeableness of the perpetrator and ratings of dishonest acts.

A fashion student was interested in factors that predicted the salaries of male and female catwalk models. She collected data from 231 models (supermodel.csv). For each model she asked them their salary per day (salary), their age (age), their length of experience as models (years), and their industry status as a model as their percentile position rated by a panel of experts (status). Use a linear model to see which variables predict a model’s salary. How valid is the model?

To begin with, a sample size of 231 with three predictors seems reasonable because this would easily detect medium to large effects (see the diagram in the chapter). Overall, the model accounts for 18.4% of the variance in salaries and is a significant fit to the data, F(3, 227) = 17.07, p < .001. The adjusted $ R^2 $ (0.17) shows some shrinkage from the unadjusted value (0.184), indicating that the model may not generalize well.

It seems as though salaries are significantly predicted by the age of the model. This is a positive relationship (look at the sign of the beta), indicating that as age increases, salaries increase too. The number of years spent as a model also seems to significantly predict salaries, but this is a negative relationship indicating that the more years you’ve spent as a model, the lower your salary. This finding seems very counter-intuitive, but we’ll come back to it later. Finally, the status of the model doesn’t seem to predict salaries significantly. If we wanted to write the regression model, we could write it as:

The next part of the question asks whether this model is valid. 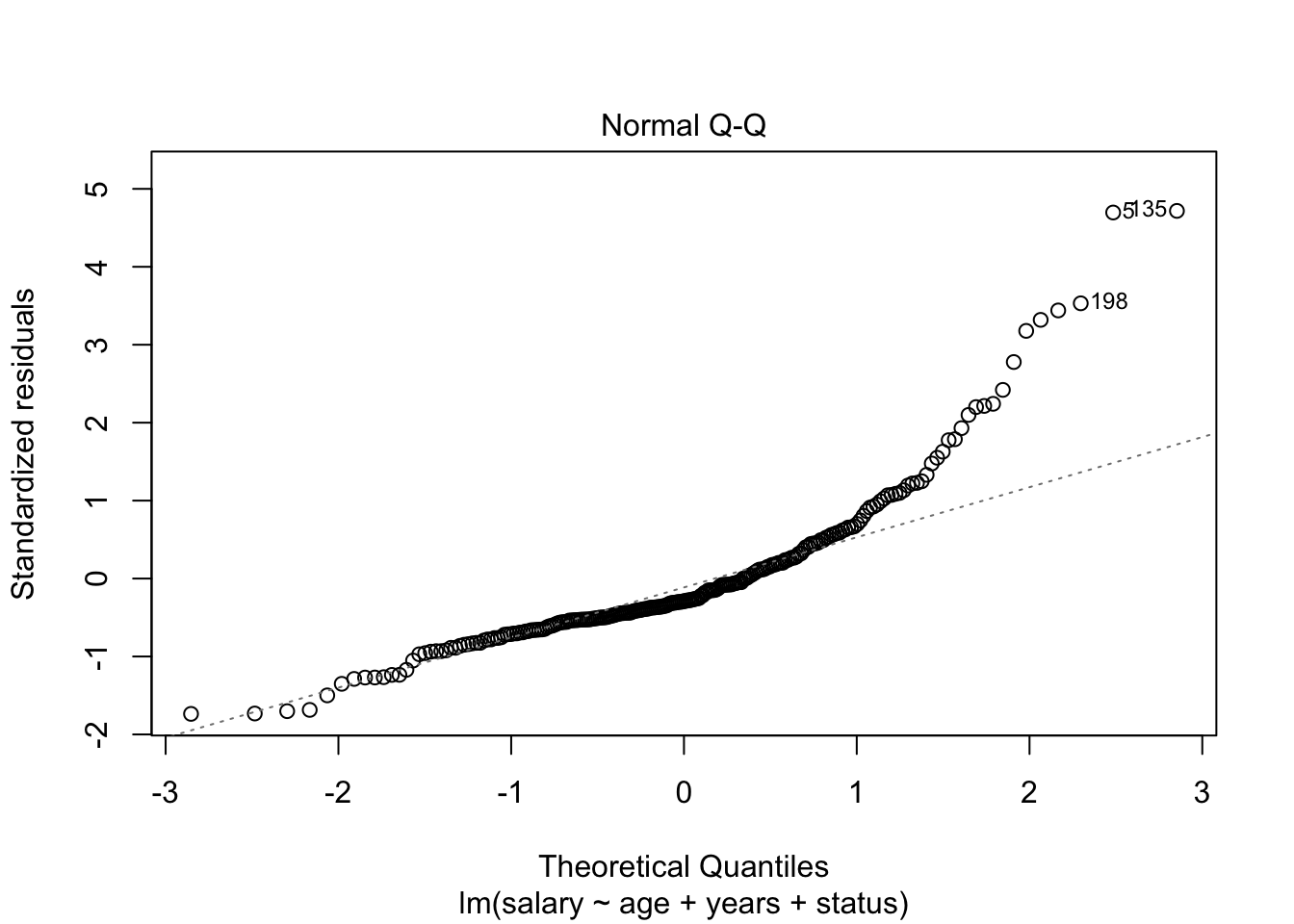 The normal Q-Q plot shows a highly non-normal distribution of residuals because the dashed line deviates considerably from the straight line (which indicates what you’d get from normally distributed errors).

Homoscedasticity and independence of errors 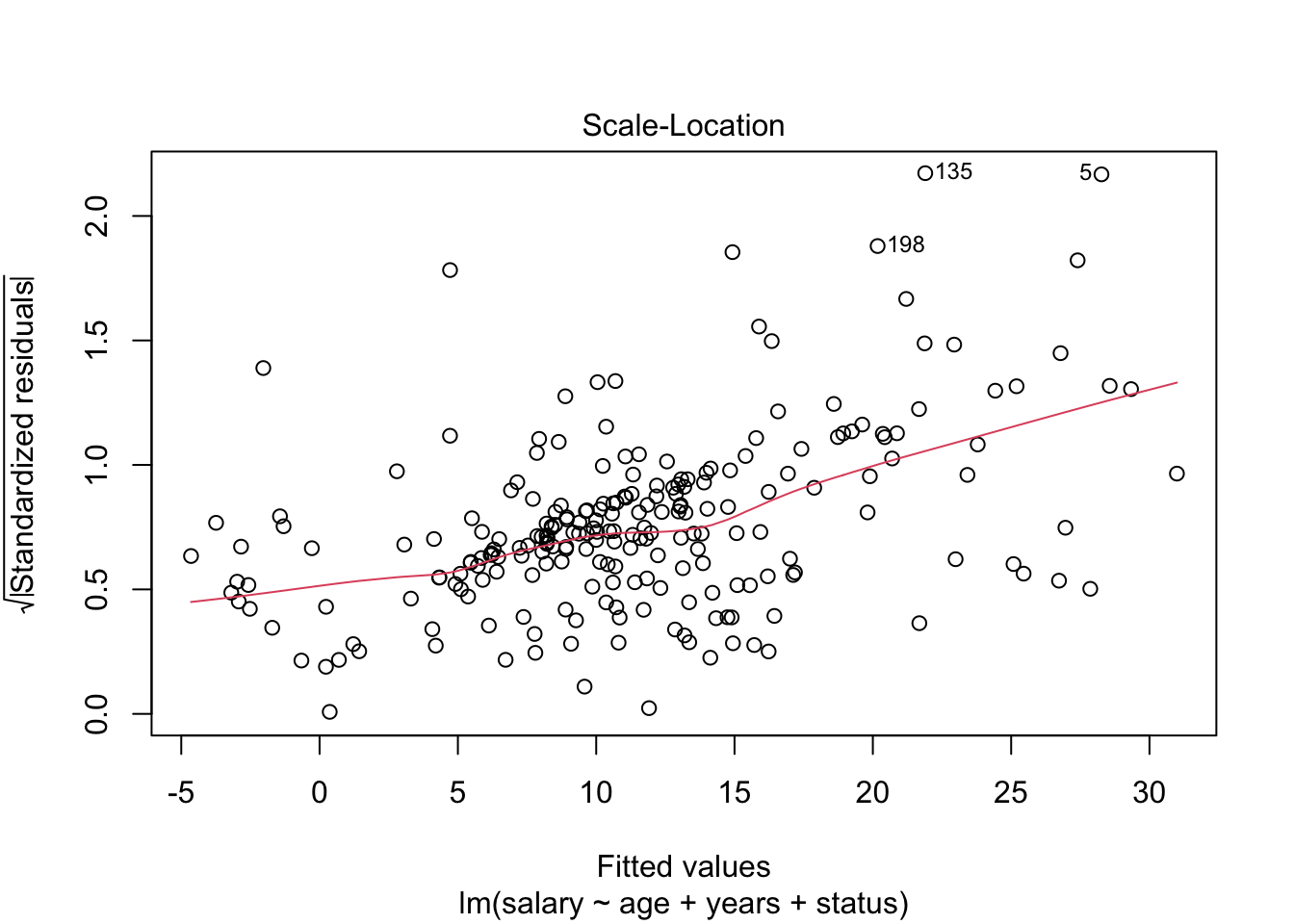 The scatterplots of fitted values vs residuals do not show a random pattern. There is a distinct funnelling, and the red trend line is not flat, indicating heteroscedasticity.

For the age and experience variables in the model, VIF values are above 10 (or alternatively, tolerance values are all well below 0.2), indicating multicollinearity in the data. In fact, the correlation between these two variables is around .9! So, these two variables are measuring very similar things. Of course, this makes perfect sense because the older a model is, the more years she would’ve spent modelling! So, it was fairly stupid to measure both of these things! This also explains the weird result that the number of years spent modelling negatively predicted salary (i.e. more experience = less salary!): in fact if you do a simple regression with experience as the only predictor of salary you’ll find it has the expected positive relationship. This hopefully demonstrates why multicollinearity can bias the regression model. All in all, several assumptions have not been met and so this model is probably fairly unreliable.

Load the data and fit the model. We need to conduct this analysis hierarchically, entering parenting_style and sibling_aggression in the first step (forced entry) and the remaining variables in a second step using a stepwise method (applying the step() function:

Based on the final model (which is actually all we’re interested in) the following variables predict aggression:

The only factor not to predict aggression significantly was:

Based on the standardized beta values, the most substantive predictor of aggression was actually parenting style, followed by computer games, diet and then sibling aggression.

The Q-Q plot suggests that errors may well deviate from normally distributed: 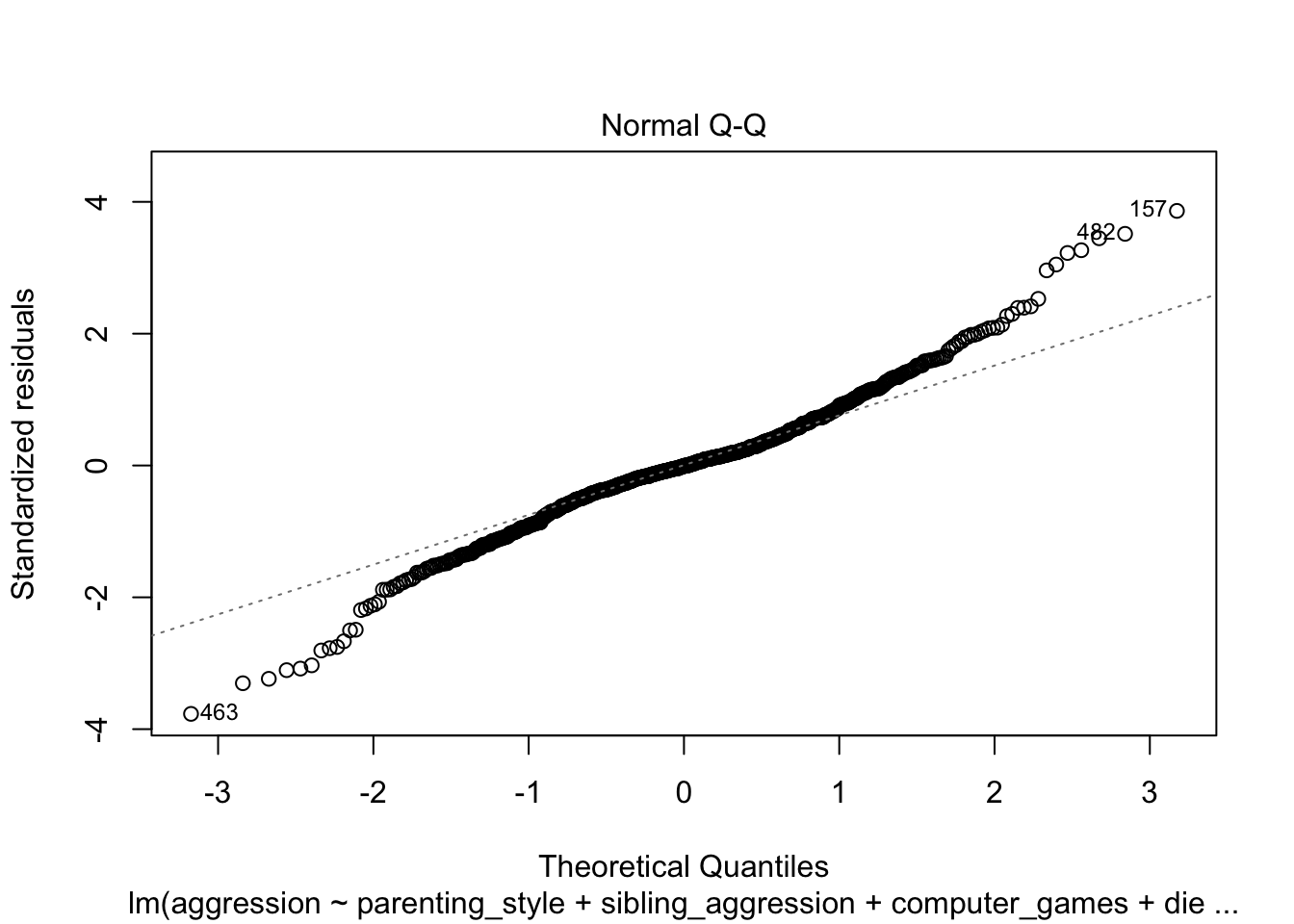 The scatterplot of predicted values vs residuals helps us to assess both homoscedasticity and independence of errors. The plot does show a random scatter, but the trend line is not completely flat. It would be useful to run a robust model. 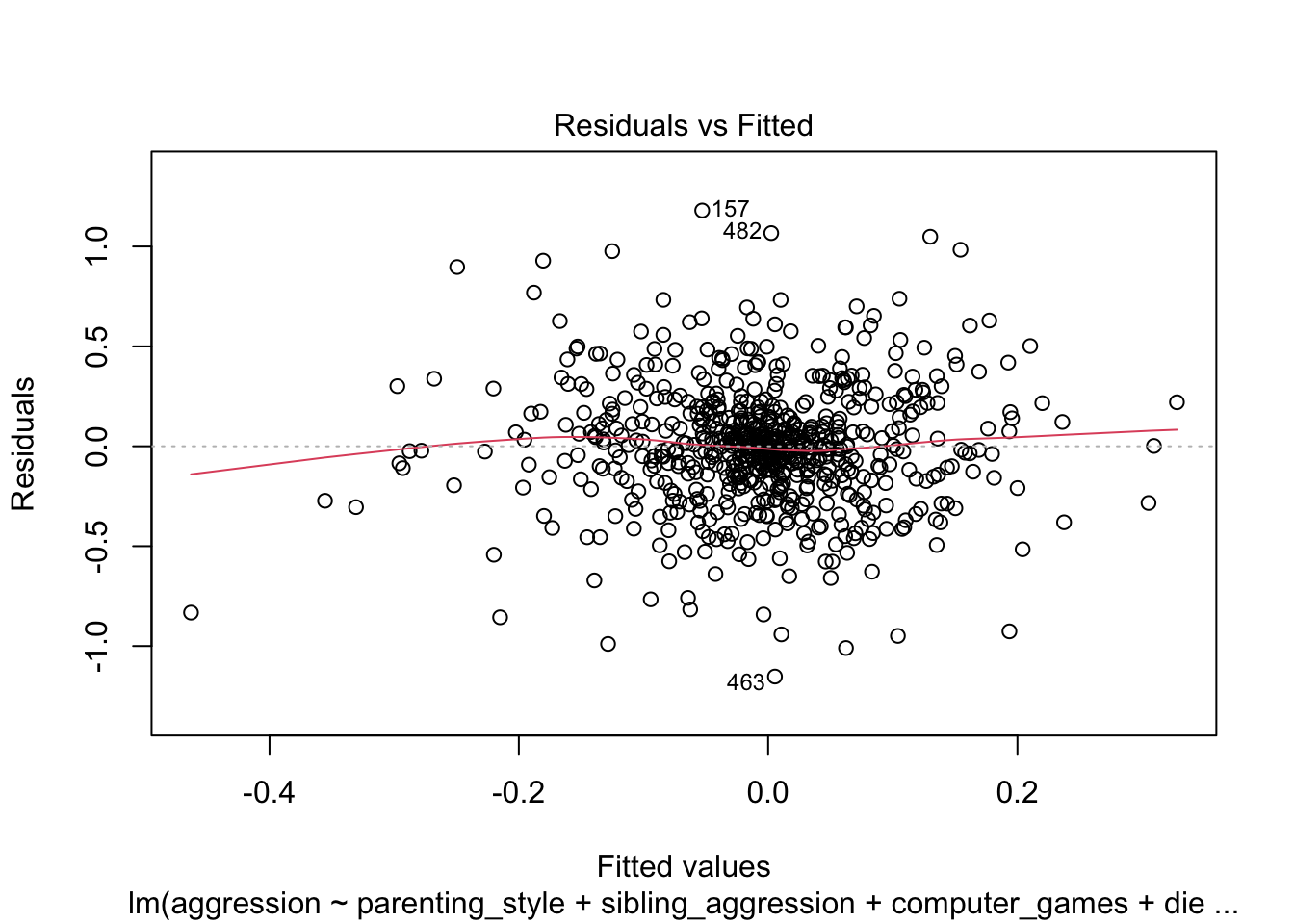 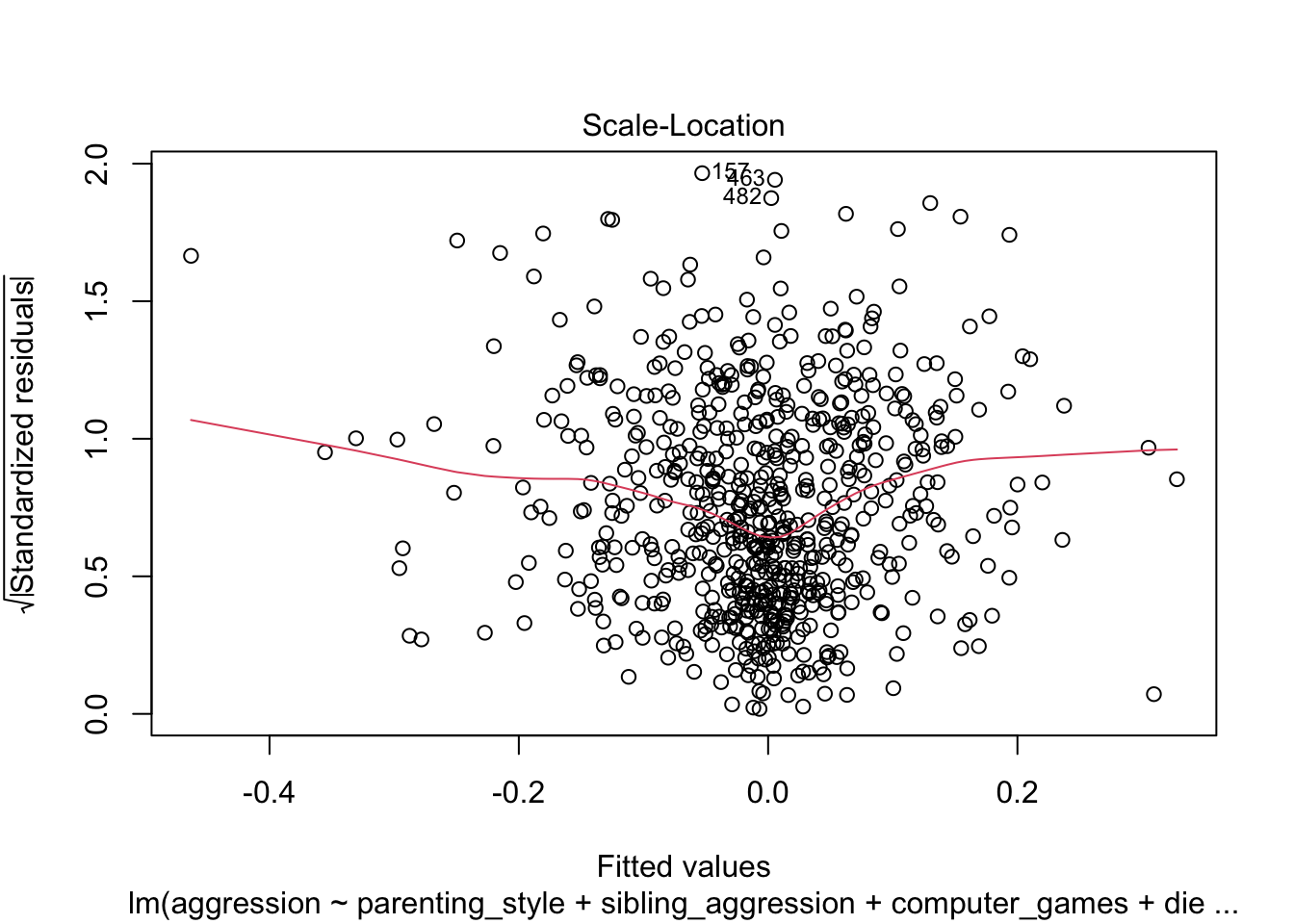 The influence plot looks fine. There are no extreme Cook’s distances and the trend line is fairly flat. 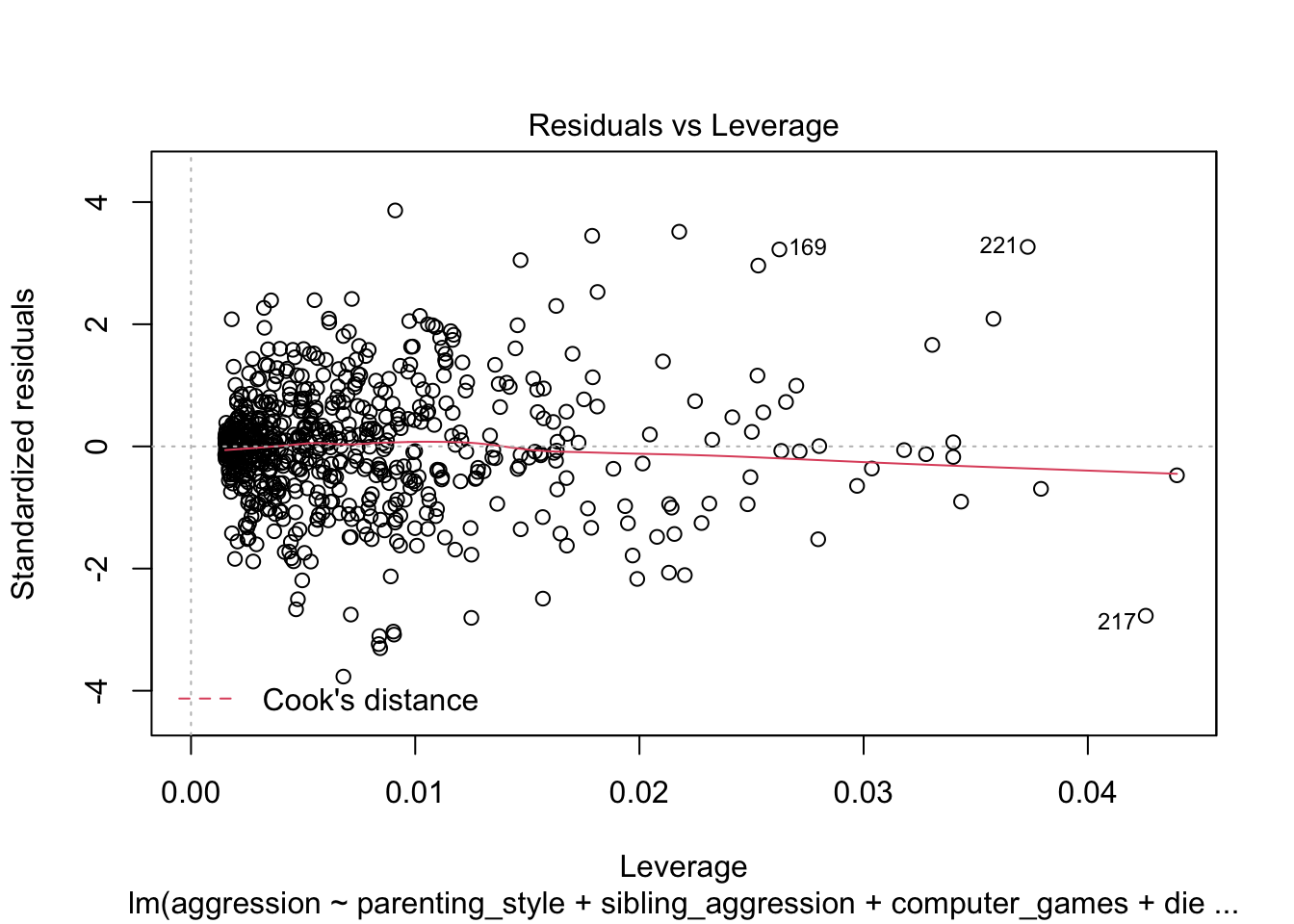 To recap, the models are fit as follows (see also the Labcoat Leni answers). Load the data directly from the discovr package:

Fit the models that look at whether narcissism predicts, above and beyond the other variables, the frequency of status updates.

Fit the models that look at whether narcissism predicts, above and beyond the other variables, the Facebook profile picture ratings.

Get the bootstrap CIs:

The main benefit of the bootstrap confidence intervals and significance values is that they do not rely on assumptions of normality or homoscedasticity, so they give us an accurate estimate of the true population value of b for each predictor. The bootstrapped confidence intervals in the output do not affect the conclusions reported in Ong et al. (2011). Ong et al.’s prediction was still supported in that, after controlling for age, grade and sex, narcissism significantly predicted the frequency of Facebook status updates over and above extroversion, b = 0.066 [0.03, 0.10], p < 0.001.

Get the bootstrap CIs:

Similarly, the bootstrapped confidence intervals for the second regression are consistent with the conclusions reported in Ong et al. (2011). That is, after adjusting for age, grade and sex, narcissism significantly predicted the Facebook profile picture ratings over and above extroversion, b = 0.171 [0.10, 0.24], p < 0.001.

Coldwell, Pike and Dunn (2006) investigated whether household chaos predicted children’s problem behaviour over and above parenting. From 118 families they recorded the age and gender of the youngest child (child_age and child_gender). They measured dimensions of the child’s perceived relationship with their mum: (1) warmth/enjoyment (child_warmth), and (2) anger/hostility (child_anger). Higher scores indicate more warmth/enjoyment and anger/hostility respectively. They measured the mum’s perceived relationship with her child, resulting in dimensions of positivity (mum_pos) and negativity (mum_neg). Household chaos (chaos) was assessed. The outcome variable was the child’s adjustment (sdq): the higher the score, the more problem behaviour the child was reported to be displaying. Conduct a hierarchical linear model in three steps: (1) enter child age and gender; (2) add the variables measuring parent-child positivity, parent-child negativity, parent-child warmth, parent-child anger; (3) add chaos. Is household chaos predictive of children’s problem behaviour over and above parenting? (coldwell_2006.csv).

Write a function to round values in the output!

Model 3: In a final block, add chaos to the model: